Without its talented actors, “News of the World” might fade into the awards season background but it’s a great entry into the western genre.

If you ask anyone and  they’ll tell you that Tom Hanks and awards season go hand in hand and rightfully so. Last year, he was nominated for an Academy Award for Best Supporting Actor for A Beautiful Day in the Neighborhood. This year, Hanks ditches Mr. Rogers’  neighborhood and heads west in News of the World, a western drama set in civil-war era Texas and revolves around a former captain of the Confederate army who makes a living reading to the public and is tasked with returning a lost young girl to her family across the state while of course encountering road blocks aplenty along the way.

So here we have a well-known actor (Hanks) and a young unknown actor, Helena Zengel playing opposite him and you might think they’re just doing another version of True Grit. Well, I’m here to tell you that it’s far from that and stands out as its own unique story.. as unique a western can be. Newcomer Helena Zengel gives my favorite performance of the film in the role of Johanna, a young girl orphaned twice-over lost and in search of a sense of home. She’s able to switch from being curious to cross to wild from scene to scene which is most impressive. Even in her silence she’s able to speak volumes to the audience. If there were ever a role for Tom Hanks it’d be the role of Captain Jefferson Kyle Kidd. He’s given some dialogue but his strength also lies in his silence and moves along the film beautifully. It’s touching to see how the chemistry grows between the two characters until you’re welled up with emotions at the ending. I could see Hanks receiving a Golden Globes nod but I don’t think the film has enough traction to lend him or Zengel nods at the Academy Awards.

News of the World is a pretty standard Western flick. There’s small dirt-road lined towns, shoot-outs, and lots of buffalo – but I think that’s what I love about it. It’s almost like a love letter to the westerns of old. It feels like it was made with a lot of care and takes pride in the genre. I haven’t seen a ton of westerns but I don’t think I’ve even heard of one with the same plot as this. That being said I definitely know it’s been done before in different genres so it’s not presenting anything really fresh but it respects its genre and Hanks does a fine job. The gun fights I think are very well thought through and choreographed. I will say that it’s a slow burn at first and there are moments where I think it could have been cut down but it’s definitely something that’s going to put anyone to sleep. The middle of the movie kept me on my toes during both of my viewings.

Easily some of my favorite camera work of the year comes from this film. Dariusz Wolski, who is known for films such as The Martian, the Pirates of the Caribbean franchise, and Sweeney Todd: The Demon Barber of Fleet Street. I didn’t do any kind of homework beforehand so I was pleasantly surprised to find out the cinematographer. The film is gorgeous and shot in some beautiful areas of New Mexico. The whole movie gives off all the vibes a western should and as always is accompanied by a beautiful score by the always-welcome James Newton Howard. 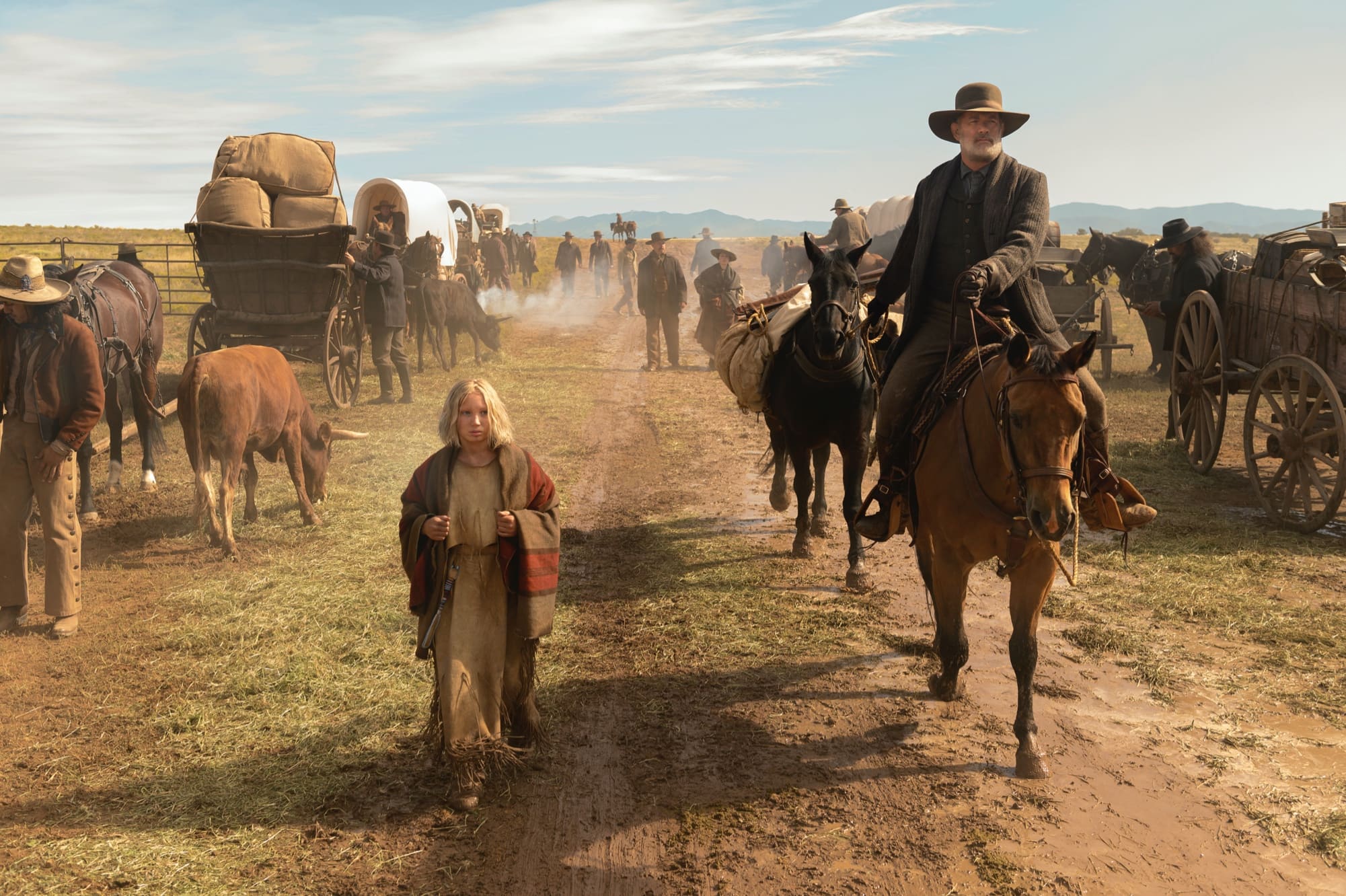 Paul Greenglass’s venture into the western genre is passable in story, is supported by a cast that gives their all, but exceeds all my expectations as far as cinematography and editing goes. I would love to see Wolski’s work get a nod at any award show! It’s harmless and could be enjoyed by anybody willing to give it a try.

Jan 13, 20211 Comment on Without its talented actors, “News of the World” might fade into the awards season background but it’s a great entry into the western genre.Movie Reviews
Tags Awards Season, Drama, Paul Greenglass, Tom Hanks, Western

One thought on “Without its talented actors, “News of the World” might fade into the awards season background but it’s a great entry into the western genre.”