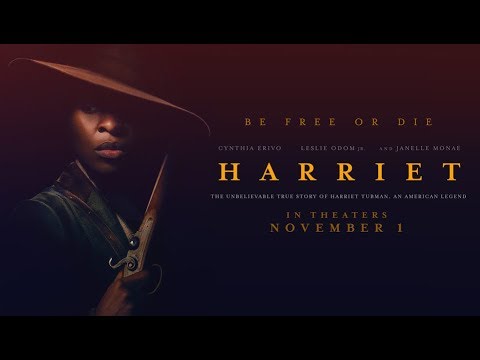 Shrouded in controversies from the minute it got off the ground (see articles about Julia Roberts and the executive who wanted to cast her in the lead role) it would seem Harriet might have been shelved early on but thankfully the filmmakers prevailed. Seeing as how legendary and important Harriet Tubman and her legacy is one could understand why their were initial issues with casting someone with the caliber to evoke the spirit and innovation of Tubman. I understand the controversies that surround the film but I want to say that I don’t think they have much merit. Please don’t let those grumblings stop you from going to see this movie! It is an important piece of cinema that does a fine job with its source material.

To start off, Cynthia Erivo is an absolute FORCE. The filmmakers originally found Erivo when she was performing in the Broadway-adapted The Color Purple. If you’ve listened to any of that soundtrack then you’d quickly realize the power that she holds. While she does an amazing job portraying Tubman acting-wise she also gives us brief snippets of her powerful voice. All that being said it’s clear she is the standout of the film. While she is the standout of this film she is surrounded by a cast that compliments her well as well as holds their own next to her. Joe Alwyn has been popping up in a lot of different awards season movies here lately and he surely did not disappoint in this film. Alwyn plays the plantation owner and owner of slaves, including Harriet. Alwyn has the ability to make the audience loathe him and loathe him even more over time. I think he’s also a force to be reckoned with and someone to keep an eye out in the years to come. Janelle Monae may be known to most as a singer but I love to see her acting in movies. She’s as brilliant as she is stunning in this film. She makes us grow attached to her and seriously love her character just like Harriet. I, lastly, want to recognize Leslie Odom Jr. for his role as abolitionist William Still. He’s just as great as any of the others. He didn’t necessarily stand out to me but I think he did a decent job to keep up with the rest of the talent.

The filmmakers were tasked with a rather daunting mission in the first place. To be able to tell a story as iconic as Harriet Tubman’s well is a feat. And I would like to say that they did a job very well done. Cynthia Erivo IS Harriet Tubman. You don’t for one minute think about Erivo that’s how well she embodies Harriet. Stories such as these are always tough to watch because of the time period and the situations these people were in. But I want to thank the filmmakers for not getting bogged down in the truly awful side of this time period (That’s not to say that that side needs to be told and is just as important because it absolutely is) and focusing on Harriet’s determination and overall her victories. This was Harriet’s movie. There were no times where I felt they veered away from the story being told or felt the need to exaggerate on anyone’s stories. I’ve read the articles and opinions about the whole “white savior complex” that the movie supposedly evokes but I didn’t think there was a lick of that in this movie. Harriet led herself to her victories. She didn’t need anyone else.

This movie is the epitome of what a movie’s cinematography should be like. John Toll is a genius and his cinematography work in Harriet is breathtaking. While we’re on the subject of breathtaking the score is just that. Gorgeous when it needs to be and jarring and juxtaposed where needed. I also want to thank whoever did costuming for the movie because I thought they were great for the period. I always, ALWAYS say I’m a sucker for a period piece and Harriet is nothing short of that plus we get to learn more and experience the life and journey of a trailblazer. Go see this movie. While it’s breathtaking it’s also incredibly eye-opening and heartbreaking. All we can do as a society is learn from our past and move forward and try not to let the past repeat itself. And that’s why I think this movie is important. Not to mention the cast is packed with talented, seasoned actors who make this movie. I didn’t know I’d be as impressed as I was but I was and I can’t wait to give it a second and third watch.