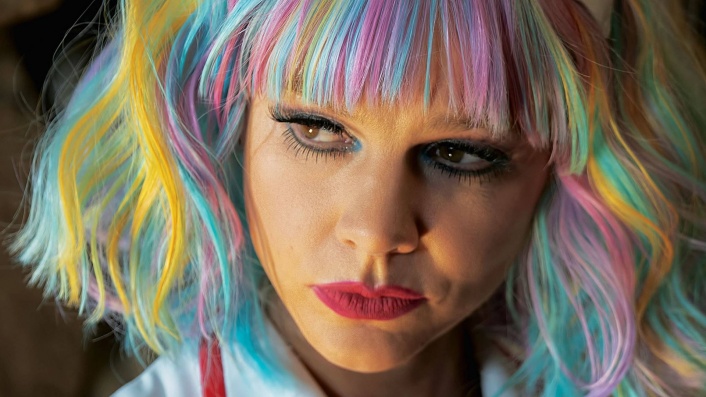 And it’s back to movie theaters I go! AMC Theatres are doing a terrific job in ensuring their customers are seated in clean seats and theaters. There are precautions at concession stands and all doors are propped open to reduce as much as contact as possible. Whenever you buy your ticket you’ll notice that they are skipping rows and theaters are only seating at 40% capacity. I feel very safe going and knowing I’m socially distant from anyone who might be in the theater. Now, with that out of the way.. Promising Young Woman!

Going into this film I had expectations and I knew I wouldn’t be disappointed. If you don’t know who Carey Mulligan is I highly recommend you check out anything she’s in. The woman is a force. And I’d go so far as to say that she gives her best performance I’ve seen in this film! She is one of the most underrated actresses of our time and is one of the few with the talent to disappear into any role she’s given. The two sides the audience sees of her in this film are incredibly distinct and I think attest to what a talent she is. Mulligan aside I don’t think there was a bad performance here. Bo Burnham, who plays the protagonist’s classmate turned lover, is super likable and when he needs to be he’s the exact opposite. Laverne Cox is fun but I’m never super convinced by her acting. I don’t know she tries to be charming but it comes off as stale and rehearsed.

The list of supporting actors and actresses is impressive. Each one, whether it be Alison Brie, Connie Britton, or Jennifer Coolidge, is great but never overshadows the real star here which is Mulligan. Even director Emerald Fennell makes a hysterical cameo that I lived for! There’s no way Carey Mulligan should not be recognized by the awards circuit – even the Academy. I just think that the Academy is far less probable due to the dark nature of the film’s subject matter.

So, the film is quite brazen in exploring its subject matter. And here is where I say that before seeing this one please read the description or watch the trailer and decide whether it will be triggering. They’re tough but the things talked about here are necessary. Rape is rife in the college environment. And this film tells the tale of a disgruntled woman who is still being affected by what happened years ago and taking charge and attacking it headfirst and righting wrongs in her own way. It really feels very original and different. This is Emerald Fennell’s directorial debut and I have to say that it is a solid piece of work for her just coming onto the scene (directing, that is.) Her screenplay is smart and challenging and I’m sure is making waves for anyone watches her debut.

After watching this film’s trailer you might wonder if this film is purely style over substance but I’m here to tell you that it conquers both and encompasses both formidably. Promising Young Woman‘s cinematography alone is worth the viewing. With the film’s frilly costuming and pop song-laced soundtrack the juxtaposition between everything is astounding. The film is gorgeous while dealing with very heavy topics effectively.

I don’t know how much better you can get than this but it’s easily in my Top 10 movies of 2020 list (stay tuned for that as well.) Carey Mulligan and Emerald Fennell should take all the awards shows in my opinion. I’ll be crossing my fingers until those announcements and in the meantime you should check out this fiercely bold piece of art!