“American Son” is a raw, gut-wrenching story from beginning to end.

Originally running as a Broadway play Netflix’s American Son is a riveting yet poignant jaunt into the sensitive issue of racial inequality. Set in modern day Miami, the story revolves around a mother, Kendra Ellis-Connor, and her estranged husband, Scott Connor, who are stuck in a sort of purgatory waiting for news on their son’s disappearance. While waiting, the couple  re-hash the issues between the two that led to their separation.

Any fan of “Scandal” can attest to the power and the talent that is Kerry Washington and plays her role as Kendra Ellis-Connor just as well as she did Olivia Pope. She has great chemistry with the other main characters played by Steve Pasquale (Scott Connor), and Jeremy Jordan as Officer Paul Larkin. The trio was blessed to not only portray these characters in the film but also on Broadway when it first ran and its very apparent. The standout though is Washington, of course. Anything with her name attached to it is a must for me. While the strong, powerful side of her acting is most admirable her sensitivity and rawness should also be recognized. She seriously runs the gamut when it comes to playing characters. She’s a powerhouse.

As I was reading other reviews before I watched I got a little bogged down because not a lot of critics had anything nice to say but I knew that I couldn’t really rely on their words I had to see it for myself. I was thoroughly impressed at how they were able to translate the stage play onto the screen. The whole film is an acting tour de force and I enjoyed every minute of it. There were times when I felt a serious sense of anger towards the police officers and how behind the times they were. It’s very eye-opening for someone who has more privileges than others and just how corrupt some people think and live. 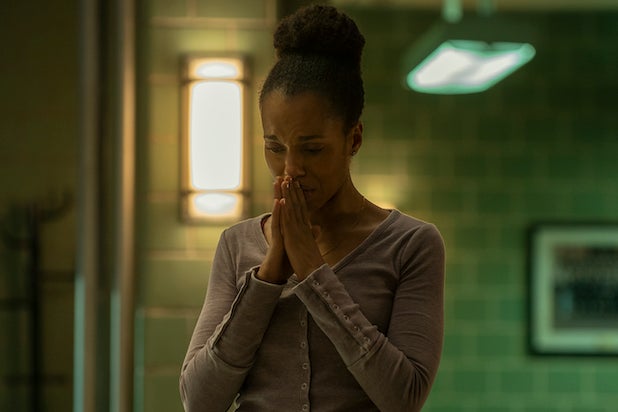 Overall I think American Son does a great job with its subject material and it translates well onto the screen. I would say it’s a must-watch even if it’s just for the ever-talented Kerry Washington.